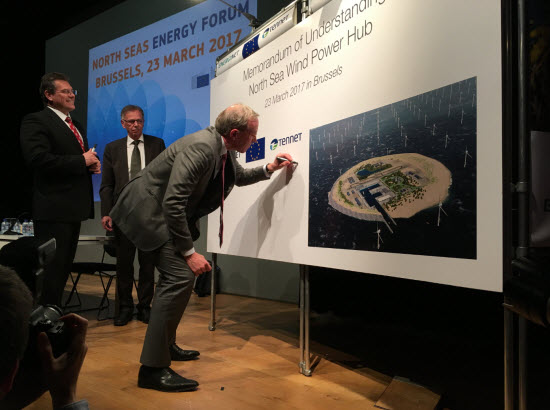 Brussels, 23 March 2017 – TenneT TSO B.V. (Netherlands), Energinet (Denmark) and TenneT TSO GmbH (Germany) today signed a trilateral agreement for the development of a large renewable European electricity system in the North Sea. This so-called ‘North Sea Wind Power Hub’ has the potential to supply 70 to 100 million Europeans with renewable energy by 2050.
This important step towards a broad consortium was taken in the presence of the European Commissioner for an Energy Union, Maroš Šefčovič. Mel Kroon, CEO of TenneT, and Torben Glar Nielsen, CTO of Energinet, signed an agreement aimed at investigating the feasibility of one or more ‘Power Link Islands’.

The idea is to create a large connection point for thousands of future offshore wind turbines. A North Sea Wind Power Hub project at a location with shallow waters and optimal wind conditions could make the energy transition both feasible and affordable for European consumers.

TenneT CEO Mel Kroon commented: “This cooperation with Energinet is an invitation to TSOs from North Sea countries as well as other infrastructure companies to join the initiative. The ultimate goal is to build a solid coalition of companies that will make the European energy transition feasible and affordable.”

“Building one or more artificial islands in the middle of the North Sea sounds like a science fiction project, but it could actually be a very efficient and affordable way for the North Sea countries to meet the future demand for more renewable electricity,” said Torben Glar Nielsen, CTO of Energinet.


A North Sea Wind Power Hub at a location like Dogger Bank has many advantages:
• Shallow waters and optimal wind conditions for offshore wind farms
• The plan has great potential for large-scale wind energy generation: a total capacity of possibly 70,000 MW to 100,000 MW could be connected to one or more Power Link Islands. In fact, a Power Link Island will create near-shore connections and reduce costs at offshore locations.
• The generated wind energy can be distributed and transmitted via direct-current connections to all countries bordering the North Sea: the Netherlands, Denmark, Germany, the United Kingdom, Norway and Belgium.
• Transmission cables will simultaneously function as interconnectors between the energy markets of the aforementioned countries. Besides transmitting wind power to the connected countries, these ‘wind connectors’ will enable the countries to trade electricity.

TenneT and Energinet (as well as any other parties that want to join) will spend a few years on investigating the details and potential of one or more Power Link Islands. If the TSOs decide to go ahead with the project, a Power Link Island could be developed by approx. 2035.

In developing locations for large scale offshore wind and a North Sea Wind Power Hub the impact on marine flora and fauna will be taken into account by the cooperating parties. TenneT and Energinet want to emphasize to be in close contact with nature and environmental organizations. A first 'quick-scan' of the impact on flora and fauna on the Dogger Bank shows both opportunities as potential risks for animals and biodiversity.